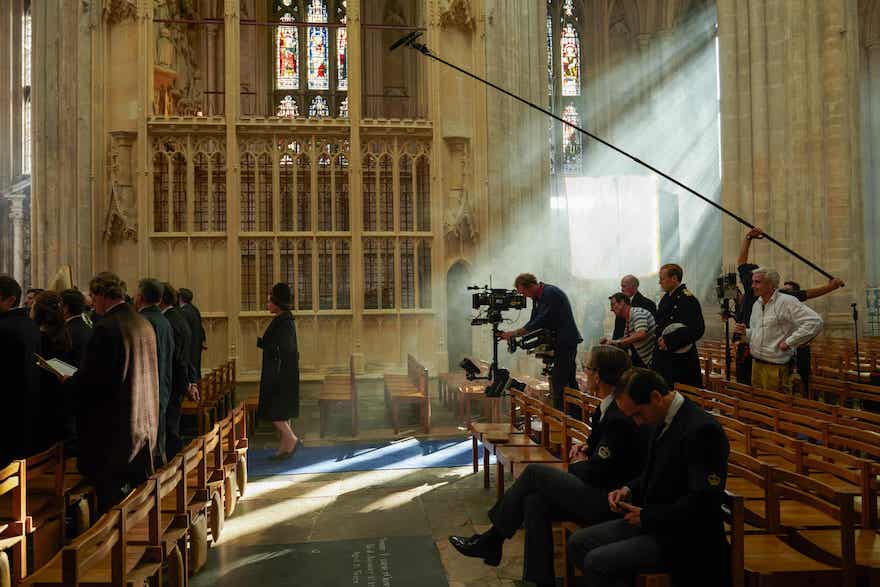 Previously we’ve looked at films created in Hampshire, and you can find the blog post here, this time we’re going to focus on Winchester with the new season of The Crown starting.

Now into the third season, The Crown has shot in Winchester before, and the Cathedral has stepped in previously, as has Winchester College, plus College and Canon Street. However, this time the Cathedral steps in St. Pauls Cathedral for the funeral of Winston Churchill.
It might not appear in the finished episode for long, but the impact of shooting in such a historic environment shines through, especially the lighting and composition. Due to the story and events depicted in The Crown, it is unlikely that many would be available to shoot in. Caernarfon Castle does get to appear this season, but that is quite unusual. Maybe the Cathedral or Winchester will get to step in again soon.

Wolf Hall was another epic period piece using many locations across the City, including the Cathedral, The Great Hall and the Hospital of St Cross. With the story set in a period in which Winchester has many architectural riches, shooting critical scenes within the City was logical. For example, the garden of the Alms Houses at the medieval Hospital of St Cross featured in the archery scenes with Clare Foy, Damian Lewis and Mark Rylance. The impact of Wolf Hall and it’s popular and critical success enabled the city council to produce a Tudor Trail to encourage new visitors to Winchester to explore the locations as well as the history of the area.

The Hollow Crown had scenes shot in The Great Hall featuring Benedict Cumberbatch as King Richard III, again the Great Hall is an excellent example of medieval architecture and is the only remaining building left of Winchester Castle.

With such riches in Medieval Architecture throughout Winchester, it is no surprise that so many historical dramas and films find themselves in the City. That is unlikely to change, many of the original buildings that they stand in for are either no longer standing, or unavailable to shoot in.

If you’d like to find out more about filming in Winchester and Hampshire, check out the Film Hampshire website. You can also find our studio listed under the local professional film services, last year we acted as the studio base for a documentary shot in Winchester. Having the studio as their base, plus to complete some of the interview footage, they knew that they always had a back-up solution in case of issues with the location shoot. You can find out more about our studio facilities on its dedicated page.