Shooting a feature film on your iPhone 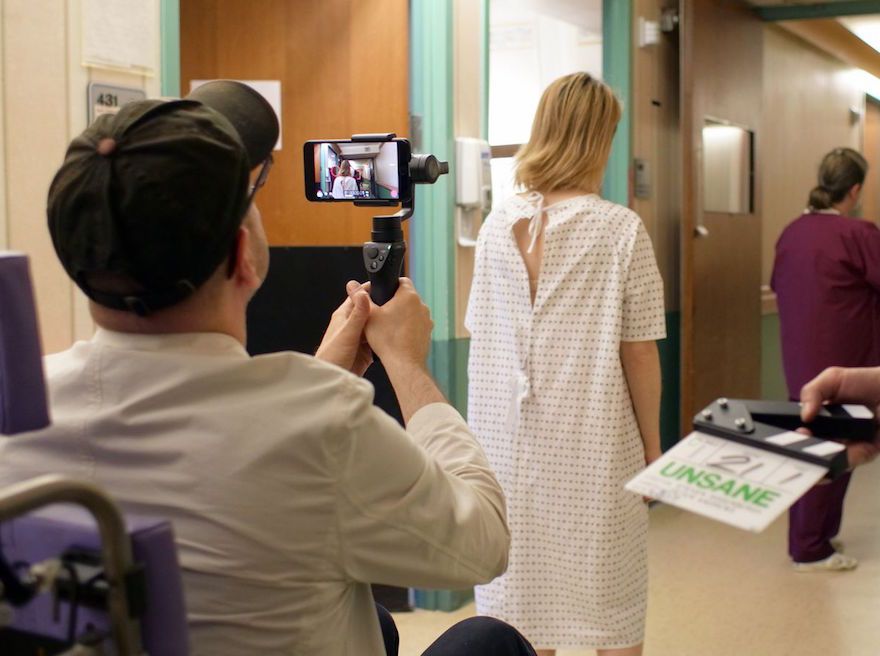 We make videos, and we like to watch films too, and love to see new exciting ways of using technology to push the boundaries, so a film just out is very interesting indeed.

Last week Steven Soderbergh’s new film, Unsane, went on general release in the UK. It’s created a great deal of interest and given its subject matter: stalking, mental health and US health care, you’d think that would be enough to discuss.

The main discussion point, and why we are joining in, is the method with which he shot the film.

Unsane was completely shot on three iPhone 7s, some shots were completed using the built-in camera, but he mainly used three lenses made by Moment, an 18mm, 60mm and fisheye, they are all in the lens shop here. To rig the camera, he used a Shoulder rig which can be handheld or fixed to a tripod, all very low key and simple. If you went with his complete kit, you’d be looking at less than £2500 all in, and if you decided that you could get away with one camera, you would be looking at £1071, and those costs included VAT! It all seems a little crazy, doesn’t it?

If he’s doing it, why aren’t more directors and filmmakers?

Sean Baker, who has come to more people’s attention with his film The Florida Project shot his first film on a series of iPhone 5s, but his most recent film was mainly shot on 35mm, with only the footage captured on an iPhone at Disney World which had to be shot undercover. The DP has stated that they shot on 35mm to get the quality of image they wanted that would create the look and feel that they wanted to evoke. So, if it fits into the aesthetic of your ideas, then it is perfect, but you’re probably not going to be seeing a Marvel Studios epic shot on a phone anytime soon.

Soderbergh’s use of the iPhone might also have something to do with the circumstances under which he shot the film and this ties into the footage that the iPhone captured for the Florida Project; keeping things secret.

Unsane was shot in secret in a disused hospital and they could move everything from one location to another in a rucksack, giving them more creative freedom and the ability to be impulsive - a very hard thing to fit in on a standard film set which everything must be so carefully planned.

The last ingredient that enabled some of the closer shots, or strange angles created was to use the combination of FiLMiC Pro and FiLMiC Remote, for the mighty combined price of £30! This is one of the reasons for multiple iPhone use, with one set up to shoot from the floor up into an actors’ face, another phone could view the footage and offer remote start and stop of shots.

Whatever happens though, the idea behind the film and the story that holds it together has to be strong whatever the format you choose to shoot on; no one is going to watch your film if it is not compelling and engaging, whatever format you decide to shoot in.

Lastly, even though Steven Soderbergh has ‘retired’ at least once, he is still going to get any film he makes distributed, either through cinemas or via a streaming service.
Having the idea and making the film is only half the struggle, but as Soderbergh said last year at the release of his last film when asked how to make a movie, he replied, ‘get a script and an iPhone and start shooting’!

We would, of course, recommend speaking to us about your new video project, plus we do have a special little rig that we can use an iPhone in because sometimes you need to get the shot you need and want! We’ll be looking at other forms of shooting videos soon.